In former coach Geoff Collins’ return to Lincoln Financial Field, the Temple Owls (3-1, 0-0 The American) beat up on the Georgia Tech Yellow Jackets (2-2, 0-1 Atlantic Coast) by a final score of 24-2.

After last week’s disappointing loss to Buffalo, the Owl defense was back to form as it forced three turnovers and just 131 rushing yards and 174 passing yards.

The Owl secondary shut down all the downfield looks for redshirt sophomore quarterback Tobias Oliver, forcing him to scramble almost every drive but to no avail.

“We just regrouped as a team after last week,” senior linebacker Shaun Bradley said. “We set our heads straight on Monday and we got back to playing defense like we know how to.”

The Owls started the game off on a strong note, as they went 55 yards downfield and got inside the Yellowjacket redzone.

“At that point we’re already in the red zone,” redshirt junior quarterback Anthony Russo said. “We have to get points on the board. We could’ve gotten three points on the board. In a close game those three points matter. So it was me trying to make a play and I have to get that out of my head and just throw the ball away and live to see another day.”

The Yellowjackets couldn’t do anything with the opportunity though, and went three-and-out on their drive.

Both the Owls and Yellowjackets weren’t able to manage a threatening drive for the rest of the first quarter, and at the end of the opening 15 minutes the score sat tied at 0-0.

Yellowjacket quarterback Tobias Oliver converted on a 4th-and-three scrambling away from the oncoming rush and went 10 yards upfield to the Owls 20-yard line. 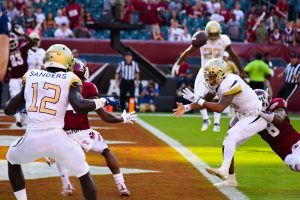 On 3rd-and-goal for the Yellowjackets, Oliver again scrambled out and right before he got into the endzone, linebacker Isaiah Graham-Mobley popped the ball out and it landed in cornerback Christen Braswell’s hands.

“That’s a great play,” Bradley said. “You got to trust your teammates on the field at all times. I had a bad angle and couldn’t get to him but luckily Isaiah had my back and was right there. Great play.”

The Owls were moving downfield before being stopped on a 3rd-and-6 at their own 38-yard line. Once again though, the Yellowjackets went three-and-out and punted back to the Owls.

On the next drive, freshman running back Ray Davis rushed for 37 yards on 5 carries and one touchdown to put the Owls on top.

“He’s so tough,” Russo said. “To be a true freshman coming in here and playing Big 10 schools, ACC schools, all these big time teams, he’s coming in he’s beating all of them. He’s taking some big hits and popping right back up and moving onto the next play. He has a lot of toughness to him and to be able to carry himself with such respect means a lot. He’s mature beyond his years.”

Russo connected with wide receiver Jaden Blue for 14 yards on a 3rd-and-8 to keep the Owl drive going. Four plays later on 4th-and-1, Davis ran for 18 yards into the endzone.

The Yellowjackets went three-and-out again and the Owls were able to hold on to the ball for the rest of the second quarter, resulting in another touchdown.

Senior running back Jager Gardner and Davis got through the Yellowjacket rush time-and-time again as they ate up five minutes and 19 seconds off the clock. Davis ran in from one yard out for his second touchdown of the day, and the Owls were up 14-0 going into the halftime break.

Five minutes into the third quarter, Oliver coughed the ball up again and the Owls were able to recover.

Oliver was looking to run after scrambling out of the pocket, but Ifeanyi Maijeh forced the fumble, and Benny Walls picked up and ran 74 yards to the endzone for the scoop-and-score touchdown.

On their next possession, the Yellowjackets punted again, but downed it on the Owl one-yard line. On the next play, Davis tried to run out of a pistol formation, but got tackled in the endzone for a safety.

The Owls had given up their first points of the day, but were still up 21-2.

Both teams weren’t able to get a solid drive going for the rest of the quarter before kicker Will Mobley connected on a 34-yard field goal to extend the Owl lead to 24-2.

The Yellowjackets had a chance to cut the lead down in the fourth quarter, but Walls picked up his second turnover of the day on an interception inside the end zone. The Owls held the ball for the last 5:32 of the game and when the clock hit all zeros, the Owls had improved to a 3-1 record.

Oliver struggled mightily today passing the ball, going just -/- on the day. The only way that the Yellowjacket offense was able to get moving today was when he scrambled out of the pocket and beat the rush up field.

The running game and defense were highly effective for the Owls today. Davis finished with 135 yards on 29 carries and two touchdowns.

On the other side of the ball, the defense was back to top form as it forced three turnovers. Linebacker Shaun Bradley came back from his early ejection last weekend and had seven tackles on the day, while Walls added an interception to his six tackles and scoop-and-score touchdown.

“We just focused back in on in practice,” Bradley said. “Last week was one game, just one game. That doesn’t define who we are. Everybody gets run on every now and then. Bad things happen but we rebounded. We keep going and keep pushing.”

The Owls are back in action Thursday night as they travel to East Carolina for a matchup with the Pirates in their first American Athletic Conference matchup of this 2019-2020 season.