This past April, Temple President Richard M. Englert approved on the university 2019 Climate Action Plan. The plans to move towards carbon neutrality by 2050, is in line with Philadelphia’s own climate action plan, which plans to reduce 80 percent of carbon emissions by 2050.

What are the other facilities associated to Temple University doing? University Village, also known as American Campus, is an off-campus housing for colleges and university students with over 206 properties with the largest private dormitory manager in the United States. With hundreds of students living in the complex in Philadelphia, some students did not know the facility recycled.

“I don’t think they have that” Anne Yi, a sophomore at Temple and second year at University Village.

Where the residents dispose of their waste, there is no place to throw away recyclables. There are signs in the area that say to “bag all trash before placing into bins.” 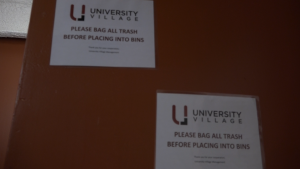 “I’ve noticed that even if you do put recyclables out, they just throw it away with the rest of the trash.” Brooke Rutherford, a junior at Temple, used to be a resident at University Village.

When the trash is collected from these bins, they are placed into a compactor and then tossed into a bin for the waste vehicles to pick up. University Village management had no comment if these are separated from recyclables.

Last year, the office of sustainability put pressure on The Edge in efforts to implement a recycling program. Temple is not responsible for these properties for the reason they are both independent businesses of the university.

While these efforts does make the Climate Action plan have another battle to face in the future, Philadelphia is also experiencing problems of cross contamination of recyclable materials. According to Philadelphia Streets Department, many people assume that plastic bags filled with recyclable material for curbside pick-up is okay, when in fact it is not.

These bags causes machines that separated and sort recyclables, to break. Making it more costly for waste companies than it is to recycle and resell to businesses. As a result, garbage collectors toss recyclables into waste trucks when they are not recycled properly.

It is now easier for residents to recycle material for curbside waste. All recycling in Philadelphia is now “single stream” meaning residents can put all their recyclables together in one bine – cans, glass, mixed paper, cardboard and most plastic containers – no need to sort or separate them.

We all would like to think some of the stuff we throw out is recyclable, but it can cause more damage than not. To find out how to recycle properly, visit Philadelphiastreeet.com.