The Owls now drop below .500 following their 45-35 loss against Boston College.

Geoff Collins noted the two elements that plagued Temple was turnovers and penalties.

”…just didn’t win the turnover battle, and we had one more penalty than they did. Those two things, not getting as many turnovers and losing the penalty battle were the decision in the game”

Missed opportunities and mistakes continued to hurt the Owls throughout the game. 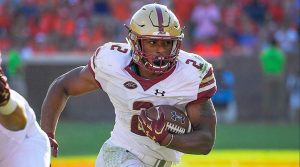 Early into the second quarter, Temple seemed poised to take a commanding two score lead on Boston College as they began to drive down the field. Then for the second time in as many weeks, an Owls receiver bobbled a pass, resulting in an interception. The Eagles immediately capitalized on the turnover with a 52-yard touchdown run, courtesy of AJ Dillon.

For BC, Dillon was featured early and often. The future NFL draft pick ran for over 160 yards and two touchdowns on the day.

Dillon took an early exit from this contest. Early in the 3rd quarter, the star running back seemed to suffer a lower body injury.

Despite the injury, the Owls still struggled to stop the run. BC’s backup running back, Ben Glines, proved to be just as effective rushing for 120 yards and one touchdown.

Following another turnover by Temple, the Eagles were able to extend their lead to a comfortable three scores.

Regardless of the deficit, the Owls were able to chip away at the lead on the back of Ryquell Armstead. After scoring his 4th touchdown of the game, the cherry-and-white were with 3 points of BC. On the day, the Temple running back rushed for over 170 yards and 4 touchdowns. Following the game, Armstead revealed he was playing for his ill grandmother.

“I found out my grandmother got lung cancer the other day, so you know I wanted to play for her. I feel like I let her down today.”

The Eagles quickly answered Armstead’s touchdown of their own, closing the door on a potential Temple comeback.

The final score at Alumni stadium was 45 to 35 in favor of BC. The Owls will look to bounce back next week when they take on East Carolina University.