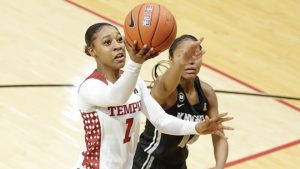 On Monday, Jasha Clinton was named to the AAC’s Weekly Honor Roll for the third straight week. The freshman guard was also named Big 5 Player of the Week for the first time in her young career.

For reference, the AAC’s Honor Roll is a weekly award that honors the best players in the conference each week. And the Big 5 is Philadelphia’s historical collegiate basketball league, made up of the city’s Big 5 schools — Temple, Villanova, La Salle, St. Joseph’s & Penn.

Clinton earned these honors with her strong play during the week of 1/18/21/. The Owls finished 1-1 that week, with a tough loss @ Houston and a win at home vs Wichita State. In both games, Clinton averaged 17.5 points while shooting 56%. Clinton led the team in scoring in both games, with 14 points in Houston, and 21 at home against the Shockers.

After the Owls win vs Wichita State, Clinton spoke about getting more comfortable in her game as the season progresses:

The Virginia Beach product is no stranger to awards, earning the 2020 Virginia Gatorade Player of the Year Award, among many other District & State awards. Clinton is also of championship pedigree, helping her Princess Anne High School squad to three consecutive state titles.

*The Owls were scheduled to play on the road @ #13 USF on Wednesday, but that game has since been postponed. The Owls’ next scheduled game is on Saturday (1/30) @ Tulane.*