“Excellence not rankings, must drive our priorities.” That’s the message President Englert shared during Thursday’s annual State of the University address.

Students, faculty and board members gathered in the Temple Performing Arts Center to hear the speech, typically centered around University  progress and opportunities. However the question on many attendees minds, was if Englert would address two big controversies—the stadium and U.S. news and world report data reports. 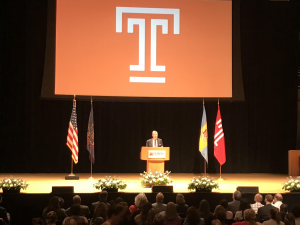 “While we’re on the topic of athletics, there will be more to come about our proposed multipurpose facility, but I’d like to underscore four important points to correct some misinformation,” says Engert. He clarifies that the faculty would a benefit to the neighborhood and not just Temple. He says, funding would come from the money otherwise used to rent the Lincoln financial field and the facility would be built on land already owned by Temple, except for the closing of one block of 15th street. Lastly he says, “Let’s all recall we’ve done this before,” referring to the number of building Temple has created in its 130 year history, including the Liacouras center.

As for other University plans, Temple is moving ahead with plans on becoming a smoke free campus, Englert says, “a systematic roll out of measures” will be coming to campus soon.

In addition Englert honored the board members and alumni for their generous donations. He also  honored the achievements of students such as Hazim Hardeman, the university’s first road scholar who will be studying at Oxford University. Engert also thanked and honored faculty for their work and achievements.

Englert’s concluding words, “finally, I want to ask you and all of us, continue to fulfill and further Conwell’s vision. Continue the great work of this University. Continue to aim high.”