PHILADELPHIA— Temple basketball overcame a slow start and a 10-point halftime deficit to hold off the UMass Minutemen at home, 65-63. The Owls remain perfect at the Liacouras Center this season, and senior captain Shizz Alston notched a career-high 31 points.

Just under 5 minutes into the game, UMass big-man Rashaan Holloway went down with a left ankle injury that paused gameplay for close to 10 minutes. He was helped to the bench without putting any pressure on the ankle, and that’s where he would remain all night.

6-4 was the score during the play, and aside from Shizz Alston, slow is the adjective Temple could be described with for the remainder of the 1st half. 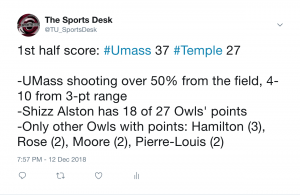 With Shizz Alston accounting for 67% of Temple’s first half points, he also climbed the all-time assists leaderboard in Temple history. With 302 in his career,  Alston passed current assistant and next year’s head coach Aaron McKie for 16th all-time. It was going to take other Owls to get involved if they wanted to overcome a 10-point second half deficit.

It seemed as though sloppy play for Temple continued into the second half- as the Owls came out of the locker room and missed their first three shots from the floor.

After the 18:00 mark, it was clear to everyone in the building that the Owls were ready to play. Quinton Rose had a hand in Temple’s first 8 points of the half with 3 buckets and a fast break assist- all part of a 16-2 run the Owls started the second half on. Temple took their first lead of the half, 43-42, with 12:39 to go in the game.

The see-saw scoring ensued well into the second half- until 2 straight steals led to Temple baskets with 7:47 to go, putting the Owls on top 52-48.

The Atlantic-10’s second leading scorer Luwane Pipkens (20.5 ppg) had been a center of concern for Temple coming into the game, and the Owls held him in check for the most part. He finished with just 12 points, his second lowest point total of the season.

Steals and fast-break points, which the Owls have relied on all season, ultimately were the difference down the stretch. Temple managed 11 steals compared to UMass’ 3, and 16 fast break points compared to 2.

It did get interesting at the end, as Temple led by 3 with 14.8 seconds to go and Luwane Pipken was left open for a three point attempt. Pipkens missed it, but an offensive rebound and put-back made it 62-61 Temple with 9.3 to go.

Shizz Alston then hit three free throws in a row to ultimately secure the Owls victory, 65-63.