The Temple Owls lost to the Cincinnati Bear Cats in the final minute of the game 63-60. Temple’s Khalif Battle barely missed a half-court shot buzzer-beater off the back left side of the rim. Temple had 19 turnovers in the game 8 of which came within the first 10 minutes of the second half. Coach Mckie said after the game, “turnovers are putting us in a tough spot and have been all season and we will continue to work on that.”

Temple only had two people who went to the line all night Damian Dunn and Jeremiah Williams.

Cincinnati’s Junior Guard David Dejulius was unstoppable with 26 points and 4 rebounds. Dejulius went 55% in field goals and 36% behind when shooting 3 pointers. Temple was lead in scoring by redshirt freshman Damian Dunn who had 16 points 10 of those points and only 30% when it comes to field goals. Despite being the Owl’s top scorer Dunn said after the game “It doesn’t matter that I had the most points we lost.” The locker room clearly frustrated about losing this one.

Temple’s Tyler Perry and Khalif Battle had a magnificent first half with 8 points each. But the second half for each was not good. Battle had an ankle injury with under 30 seconds left in the first half. Coach Mckie said, “No Battles injury it didn’t affect anything. We have him more touches in the second half than in the first Cincinnati changed their defense up and he didn’t score.”

Temple’s Jake Forrester was in foul trouble within the first 5 minutes of the second half with four fouls. He sat out most of the half. This Hurt Temple’s defense substantially. Coach Aaron Mckie said,” This is something we have been deal 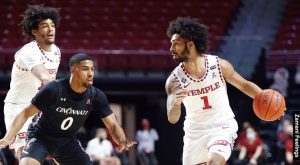 ing with all season and clearly still needs work.”

Also, Cincinnati’s Keith Williams had 15 points including 2 threes and 10 FGs. He was the only player to foul out on either team.

Temple had a slow start and then a great middle section for the game but in the ending portion of the game, everything just seemed to hit a wall for Temple and Cincinnati just took advantage of it. When Temple struggled that meant they were turning over the ball nearly every possession. Especially within the final 2 minutes and opening 1o minutes of the game. When Cincinnati struggled they couldn’t get the ball in the basket and Temple just kept getting rebounds and scoring. If Temple would have had better ball security and played well for another 2 minutes in the second half they probably would have won the game.

The Second half also had a lot of lead changes. One minute it was Cincinnati the next it was Temple then it was tied and then they would do it all again. It really was a thriller and you could tell all the press attending were on the edge of their seats seeing if Temple could make those last 5 points up in the final minute.

Temple plays again on Sunday 2/7 against the 10-4 Wichita State at 3:00 at the Liacouras Center it will be on ESPNU.