It has been nearly two weeks since the death of George Floyd, which sparked national uproar against police brutality.

In a response to messages from students across social media, pleading for the discontinuance of all ties with the Philadelphia Police Department, the university released a statement late Sunday night.

The university believes that doing so would not be in the “best interest of Temple students, faculty and staff, and our neighbors in the surrounding community.”

The statement continued by saying the Department helps keep us all safe, allowing Temple Police to access the 9-1-1 system, which aids in TUPD efficiently responding to emergency calls within the area.

In recognizing the need to recommit to police practices to rebuild trust within the public, the university outlined says new Temple Police officers will continue to receive training in “recognizing and avoiding bias and discrimination in policing” with more training to continue to be provided to all current officers.

In addition, the university will continue to work with Governor Tom Wolf and Mayor Jim Kenney to work on adopting recommendations from former President Barack Obama’s Task Force on 21st Century Policing.

Temple has not only seen public outcry for changes to not only the relationship with the Philadelphia Police Department but also with some of its own students.

“Over the past several days, we have received hundreds of messages expressing anger and disappointment at racist comments on social media from incoming and current students and the university’s response to those comments.”

The statement continued by saying the comments made by students, both current and incoming, is “repugnant.”

Earlier this week the university received negative responses to the following statements on Twitter: 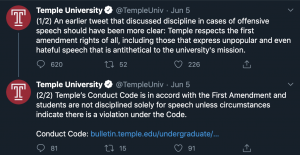 After receiving backlash they responded with this statement on Twitter:

Many students claim these messages of racism are against the university’s Student Code of Conduct, which ensures that students are held accountable for any messages of intimidation, harassment and threats of violence.

However, Temple says that as a public university, “Temple is bound by the principles of freedom of speech embodied in the First Amendment to the U.S. Constitution.

The statement continued by saying the “safety and well-being of the Temple community are paramount, and the university can and does respond to this revolting tide of bigotry and hatred in a variety of ways.”

Lastly, the statement included a partial list of university initiatives like Temple’s GEAR UP, The Grandma’s Kids program and Jumpstart, to “make it clear how much Temple cares, how vastly we see our opportunity to contribute, and how deeply we view ourselves as a partner in supporting our community.”