It’s officially March and that means postseason basketball. The American conference will be starting their tournament on Thursday, March, 8th, at the Amway Center in Orlando, Florida.

Temple is set to take on Tulane in the first round of the bracket at 7 pm. If the Owls were to beat Tulane, they would advance to play Wichita State in the second round. The Green Wave has one win over the Owls and the Owls have one win as well. The first round of the AAC Tournament will determine which team wins their conference series. 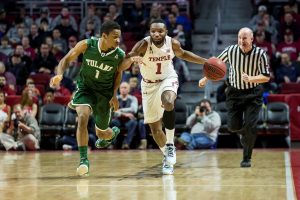 Despite Temple scoring more than 70 points and having three Owls score in double-figures, they could not stop Tulane in their first contest of the season. Melvin Frazier and Cameron Reynolds proved to be a force for the Owls. Frazier put up 25 points and dished out 7 assists, while Reynolds was unstoppable on the boards with 10 rebounds and 17 points to match. The Green Wave went back to New Orleans with an 85-75 win over the Owls at the Liacouras Center.

The next time these two teams met, the high score was similar, but the outcome was in Temple’s favor. Nate Pierre-Louis provided a burst of energy for the Owls, leading all Temple scorers with 18 points. Ernest Aflakpui grabbed 10 rebounds as well, having nearly a third of Temple’s 35 rebounds. Reynold and Frazier still gave the Owls trouble, but a second-half shooting effort of 55% from the field for Temple was enough to steal a win. Temple came out on top 83-76.

The Owls are coming into this third matchup at the 7 seed and Tulane at the 10. Even though the Owls are on a two-game losing streak, they are still running with some momentum from a five-game winning streak that took place just before their last stretch of the season.

Tipoff is set for 7 pm on ESPNU.