Today, Anthony Russo, Temple’s starting QB of the past two seasons announced he will be entering the transfer portal. In a tweet, he thanked the 3 head coaches he has played under (Carrey, Collins, and Rhule) along with his teammates. 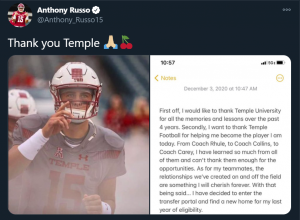 Anthony Russo came to Temple in 2016 where he redshirted his freshman year and was used as a PAT ball holder for his second season. As a redshirt sophomore, he led the owls to a 7-2 record. In 2019 he threw a career-high 246 completions with 21 passing TDs.

In 2020, those numbers dropped dramatically due to his inability to stay healthy. He ends his Temple career with 6292 passing yards, 3rd all-time at Temple, and 3rd all-time for passing touchdowns with 44.

In the wake of Russo’s departure, there is no clear replacement. This season the owls have had 5 separate players listed as the starter. The last of whom to play was redshirt walk-on Kamal Gray, who threw for 95 yards and 2 interceptions in the Owls’ last game against ECU.

Russo’s replacement will likely come in the form of either Trad Beatty or Re-al Mitchell, both have seen game action for the owls this season. Trad Beatty averaged 115 passing yards in his 2 appearances for Temple, with only one touchdown. Re-al Mitchell averaged 105 passing yards during his last two appearances and threw one touchdown as well. With neither backup showing signs of high productivity, it will be a waiting game to see who will cement themselves as the starter next season.

Russo has one year left of NCAA eligibility and it is still uncertain which program he will land in. Follow the Temple Update Sports Desk on Twitter for more breaking news and updates on everything Temple Athletics.