“From the beginning of conference play to now, every game we go into wanting a win,” senior goalkeeper Morgan Basileo said. “But nothings really changed. We know we have to win these games. It’s unfortunate the way things ended the way they did, but we have to come back and forget about this and be ready for Sunday morning.”

Senior forward/midfielder Allie Thornton converted a 78th minute penalty for the Mustangs to break open the deadlock. Basileo faced 22 shots with seven coming on net and saved six of them, with the lone goal being the penalty.

The first chance of the game came in the 16th minute from the Mustangs.Thornton took a close shot on net but Basileo made the save. The ball slipped out of her hands, allowing sophomore midfielder Celiana Torres to take a shot, but it was blocked away.

In the 29th minute, junior defender Ale Winn got a shot off a rebound after a derailed corner kick. Sophomore midfielder Hailey Gutowski managed to get in the way though and blocked away a potential goal.

“I think our defense played really well tonight,” Basileo said. “We’ve had problems in the past with defending crosses and wanting to be one-on-ones and coming off a tough game against Memphis, we really wanted to improve that. We did, and we gave SMU a pretty big run for their money tonight.”

The Owls had their best chance to score in the game in the 30th minute. Junior defender Djavon Dupree beat two defenders at the top of the box and took a shot, beating freshman goalkeeper Tatum Sutherland, but the ball went just wide right.

Sophomore midfielder Courtney Sebazco took a shot from a little over 20 yards in the 33rd minute that went just too high. She had another long shot in the 37th minute that Basileo was able to tip over the net.

At the end of the first 45 minutes of play, the Mustangs had tallied nine shots on net compared to the Owls’ two.

In the 52nd minute senior forward Morgan Morocco got the ball on the right side of the box and crossed it into the middle of the box. Her pass wasn’t hard enough but it deflected off a Mustang defender and almost went into the net before Sutherland made a diving save.

From the 53rd to 55th minute, the Mustangs tallied four corner kicks and three shots. Basileo tipped the ball away twice and made a diving save to keep the game deadlocked at 0-0.

In response to his offense not getting opportunities, coach Seamus O’Connor was pleading his forwards to “step up to the ball” and added that “you’re all hiding.” 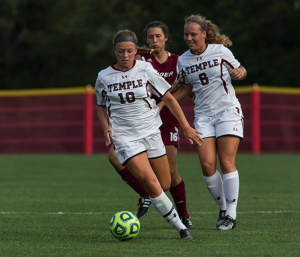 “Everyone was tired, but the other team was tired too,” O’Connor said. “So when you push their buttons, they react. They’re very proud people and big competitors, and they came back and So sometimes you just gotta know when to push their buttons. I know it’s hard when you’re tired because they’re slower and they’re playing against a good team. Sometimes they don’t know how great they can be.”

Junior midfielder Isabelle Nashmi just missed in the 65th minute when her shot loudly hit the crossbar and deflected away.

In the 68th minute, junior defender Natalie Druehl beat the Mustang defense up the field and passed off to Gutowski, who’s left-footed shot went just too high and over the net.

In the 73rd minute, Nashmi dribbled around two Owl defenders and passed off into the middle of the box after Basileo came out. With the net wide open, junior forward Jewel Boland took a shot but it was blocked away by the cohort of Owl players that came back to defend the net.

A push-from-behind was called on the Owls inside the box in the 78th minute. Several Owl players debated the referee on the call, but Thornton took the penalty and scored as Basileo dove in the opposite direction. The Mustangs had broken through for the 1-0 lead.

“It was kinda hard to tell what happened,” Basileo said. “Both players were wrapped up in each other. There was a little bit of a discrepancy between us and the ref. Unfortunately it didn’t land our way this time.”

Tempers began to flare as the Owls were desperate for another chance to tie the game up. Two yellow cards were given out in the 83rd minute, both given to Mustang players Torres and senior midfielder/forward Hailey Bishop.

The Owls but couldn’t break through the Mustang backline in the last few minutes and had picked up their third straight loss.

“Tonight was a heartbreaker,” O’Connor said. “We knew we were going to have our hands full and we just gave it everything we had. We weren’t as aggressive as possible, but our players worked themselves into the ground. There’s a lot of players carrying injuries and I’m extremely proud of them. I just wish they could get the wins they deserve.”

The Owls will be back in action Sunday afternoon when they host Houston.