Temple men’s soccer traveled Wednesday to Lawrenceville New Jersey where they faced Rider University in their 4th game on the season. The Owls came into the contest with a 1-2 record, winning their last game against nationally ranked Old Dominion in the first win with a new coach at the helm.

The Broncs offense started off strong against Temple getting four shots and two corner kicks before the Owls had a chance to attack.

The score stayed notched at zero each after a close attempt off the foot of freshman, Jalen Campbell, at the 13:10 mark.

By halftime the score was still tied up at 0 for both squads. Rider put the pressure on Temple’s defense throughout the first half, be 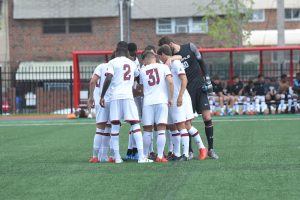 ating them in shot attempts 8-2.

After a full 90 minutes of gametime, The Owls and Rider were sent to overtime .

Quickly into the extra time, during the 93rd minute, freshman midfielder, Jalen Campbell,took things into his hands netting a strike to send Temple off with the 1-0 win.

The Owls, now 2-2 on the season, will look to continue their winning ways as they host St John University in their first home game Saturday at 7pm.