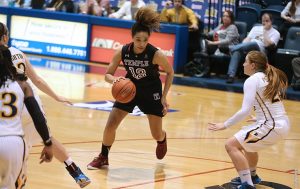 The Owls were lead by the contributions of junior Donnaizha Fountain who tallied another double-double on the season, scoring 17 points and grabbing 11 rebounds. Temple would ride on the shoulders of senior Feyonda Fitzgerald who scored  17 points and notch 6 assist. Junior Tanaya Atkinson provided a solid effort off the bench as she would score 12 points and grab six rebounds.

For the rest of the game, it would be difficult for SMU to comeback from the huge first quarter deficit. Though SMU would get off to a slow start, the Mustangs would actually compete with Temple through the remanding three quarters, even outscoring the Owls 33-30 in the second half. The deficit would be to big, and Temple defeated SMU 66-52.

“No matter what, we still found ways to increase the lead in this game,” said Head Coach Tonya Cardoza. “Even though they basically beat us in the third and fourth quarter.”

The win not only marks the 20th win of the season for the Owls, it also clinches coach Cardoza’s seventh 20th win season of her head coaching career. It also is the first victory since Temple was officially announced as a nationally ranked team on Tuesday.

“To know that we are getting noticed and our hard work is paying off feels great.” said senior Feyonda Fitzgerald. “But like coach said it doesn’t stop here. We got to keep working, and we have to keep getting better as a team.”

Temple will be back in action Sunday at 1:00, at #22 ranked USF as the Owls will look to avenge the Jan. 29 loss they suffered against the Bulls. The game will be televised on ESPN 2.