The Owls are coming off their first season-opening win in the three years, and a bye last week gave them a nicely timed resting period to focus on the long season ahead. This week, Temple will welcome into the Linc a team that has produced some eye-opening numbers to start the 2019 college season.

The Maryland Terapins, who’ve recently been ranked as high as #21 in the AP top 25 rankings this week, made a statement in their first two games of the season. They hung 79 points on Howard University while holding them scoreless in Week 1. They followed up that performance with a 40 point win against a former top 25 ranked Syracuse squad. Their dominance so far has taken many by surprise, but the game plan for Anthony Russo and company seems to remain the same.

Among the weapons that this Maryland team possesses, one key player to look out for going into the weekend is their quarterback Josh Jackson. He’s anchored their offense with 7 touchdowns and only 1 interception in two games. But their ability to run the ball, currently ranked fifth in the country at 335.5 ypg is something Temple will look to key in on. 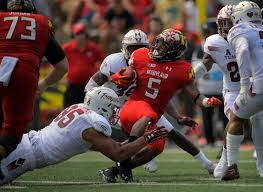 Last year, Anthony Russo made his first collegiate start under center, and his impact against a ranked Maryland team put his name on the radar for those in the conference. He’s taken a different approach towards preparing for each game with the new responsibilities he’s taken on this season.

“It’s definitely a little different of mindset. Last year I was preparing as if I was going to start every week. But this year, actually being the guy, I think I have a little bit more say in practice. So I’m just trying to be more of a vocal leader than I was last year at this time.”

The last time the Owls traveled to College Park, the defense played a big part in the upset win. Their two interceptions and two forced fumbles, including a 78-yard pick-six by their defensive leader Shaun Bradley is something they will look to carry over into the matchup this weekend.

“Their offense is a lot different from last year,” said Bradley. “ Very fast tempo and they have really good guys on their offense, but for the most part we’re focused on ourselves and what we can do.”

Junior DE Quincy Roche reiterated a similar statement at the end of practice Tuesday. “Like I said, they’ve got something great going on offense right now you know. I think we’re doing a great job, so it’s going to make for a really competitive game”.

Gametime for the matchup is set for Saturday, September 14th, at Noon. The game will be broadcasted on CBSSports, 97.5 the fanatic and WHIP radio.