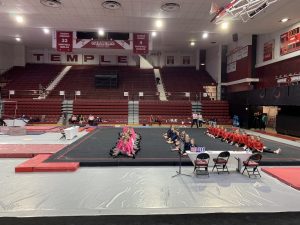 Sophomore all-around Ariana Castrence dominated for first place in every event scoring a 9.800 in the vault, 9.800 in the uneven parallel bars, 9.825 on the beam and 9.850 on the floor exercise. Castrence broke the Temple Gymnastics all-around record with a score of 39.275.

“We’re only going to get better from here,” Castrence added “as the season goes on, it’s a very long season but we are working to preserve our bodies so that we can reach that top, and top what we did last year.”

This past week the team was faced with the hurdle of keeping everyone healthy enough to perform. “To be completely honest there were a lot of nerves” coach Josh Nilson said. “We got hit with the flu bug big time. We had about one third of the girls taking flu medicine all week, so they did a great job considering.”

“I think thats what makes us a strong team” Junior all-around Jordyn Oster said. ” knowing when people are down or not where they’re suppose to be, we still have enough depth on our team that we can work with it and we can perform and do our jobs.”