Temple men’s soccer team (2-3-0) hosted the University of Delaware Blue Hens (1-2-2) Tuesday night at the Temple Sports Complex for a 1-0 victory for the Owls.

The Temple Owls started off the game with immense intensity, maintaining possession over the Blue Hens for the entire game. The team’s defensive line efforts didn’t go unnoticed either with the help of sophomores Esteban Suarez and Mickael Borger, and juniors Brandon Johnson and Pierre Cayet.

The first chance for Temple came early in the game, after a free kick was given to the Owls after freshman Sean Karani took a foul. Teammate Amir Cohen, freshman, then launched the ball into the box, where Cayet was there to put it in the back of the net but was eventually ruled offsides.

A second opportunity came in the 18th minute of play when sophomore Paul Frendach sent the ball in, where sophomore Elias Villegas headed it just high of the crossbar. 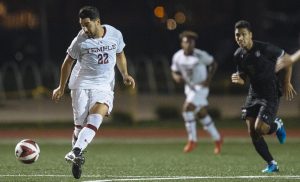 Another set of fresh legs entered the game after halftime, giving Temple an edge that Delaware didn’t have with only a few substitutions on the sideline.

The Blue Hens, with no shots on goal in 90 minutes of play, gave the Owls a better chance of winning.

Just under four minutes into the second half, Temple secured the game winning. Senior captain, Luke Fernades shoots which struck the left post and then was collected by Cohen, who then converted the score and earning his first goal in cherry and white.

Temple’s head coach Brian Rowland was happy with his teams performance and liked to snag another win, the second of the season.

The Owls will be back in action on Saturday, September 21st, to face rivals Upenn at 7pm on their home turf across the city.