The Owls took on the 2-9 UConn Huskies on Saturday and took care of business.

The game did not start the way the score would dictate, however. Temple opened the game by giving up a 51-yard touchdown pass on the Huskies opening drive. Then, after going 3-and-out the Owls gave up yet another first quarter touchdown digging themselves into a 14-0 hole.

It was not until Anthony Russo found Braden Mack for a 63-yard touchdown that Temple was finally able to get on the board.

“Obviously it was an awful start,” Coach Rod Carey said postgame. “Emotions run high on Senior Day and that was no different for us. We lost our mind there for a little bit.”

Luckily for the Owls, Todd Centeio was able to help refocus the team scoring on his first drive. Still, their early struggles continued until halftime where they trailed the Huskies 17-14.

Despite the poor play in the half, Rod Carey didn’t yell at his team when they went into the locker room. Instead, he just told his team to refocus, and be themselves and that’s exactly what they did.

It was a completely different story for the cherry and white when they came out of the tunnel. Coming out of the gates hot, Temple struck first with Russo once again finding Mack for his second touchdown starting a 35-0 rout of the Huskies and leading to an Owls win to the score of 49-17. On the day, Mack had 5 catches for 171 yards and 2 touchdowns.

However, Mack wasn’t the Owls receiver people were talking about at the end of the game. Jadan Blue made history becoming Temple’s single season receiving yards leader, passing Gerald Lucear’s 964 yards mark set in 1979. Currently, Blue has 975 yards on the season putting him just 25 yards away from being the Owls’ first 1,000 yard receiver in school history.

Quincy Roche was able to get in the Temple history books as well tying Adrian Robinson with the most sacks in a season. Roche is up to 13 sacks on the year and 26 on his career, which puts him 2nd on the Owls all-time sacks list. 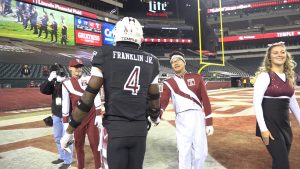 At the end of the day, though, this game was about the senior class and Carey was quick to note their greatness not only as football players, but as people.

“My biggest regret is that I don’t have any more time with them… They are unbelievable people.”

Senior linebacker Sam Franklin personified this profile with his actions at the start of the 4th quarter where every senior band, cheerleader and dance team member was acknowledged. Franklin took it upon himself during the heat of the game to walk over, thank and shake each of their hands.

“I don’t want their job to get unnoticed,” Franklin said. “They help us out a lot whether they know it or not… I want them to feel special because it’s their senior night too.”

Franklin was able to contribute in a big way on his senior year getting a pick-6.

The Owls will now turn their focus to their bowl game, which has yet to be announced.