The Owls have been on a midseason roll as of late.  The women have recently moved to a record of 10-6 on the season and have dominated conference play, only losing two of the eight conference matches they have played so far.  The team has won a total of three straight games and looks to continue the success in the coming games. 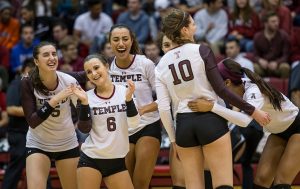 The Owls traveled to Florida to play the USF Bulls, and left there without dropping a single set.  Once again, Izzy Rapacz led Temple’s offense in this game with 12 kills.  The team hit .284 and played great defense as well, holding USF to a hitting percentage of .186.  This was in big part of Janine Simmons who led both teams in blocks in the game with four.  Rapacz had three blocks and Dana Westfield had a block of her own.  During this game, a big milestone was achieved by Dara Peric, who notched her 1,000 career dig.  This win took the Owls to a record of 9-6 on the year, and dropped the USF Bulls to a total of 7-10.

After beating USF the Owls traveled to Orlando just two days later to play UCF.  The Owls needed all five sets to get the weekend sweep.  The Owls quickly fell behind by losing the first two sets to the Knights but quickly rebounded, taking the final three sets and getting the win.  The momentum was shifted in this one, due to the dominant performance by Izzy Rapacz once again.  She hit .537, and led all players in kills with 25.  Additionally, she had six digs and two blocks.  Senior Kyra Coundourides, had another double-double, with 48 assists and 16 digs.  Redshirt freshman, Dana Westfield also played well with 11 kills and five digs.  The team dug themselves out of an early hole, by playing as a team and it certainly showed how quickly this team can shift the momentum of any game.  However, the team did have a little trouble closing out the match in the final set, down 12-9 in the closing points of the match.  They once again shifted the momentum and went on a 6-1 run giving them their 10th win on the season.  The Knights fell to 10-10 on the season and 3-5 in conference play.

For the second week in a row, the Weekend Star is Izzy Rapacz.  Izzy has been showing that she is one of the best outside hitters in the conference.  She had a total of 37 kills over the weekend, and has been tearing it up in the month of October.  She is showing that she is the sole leader of this Temple team.  She is looking to lead this team up in the standings as the Owls prepare for their final month of play in November.

The Owls have their last two games of October at home on October 27 and 29.  On Friday, October 27, the Owls will host Houston at 7 pm.  That following Sunday, October 29, they play against Tulane.  Houston currently sits at a record of 6-10 and should be a winnable game for the Owls, as they took the first meeting of the two schools, 3-2.  Additionally, Houston has lost three straight and their season is slipping from them.  Tulane however is 12-9 on the season.  Tulane’s record can be deceiving as they have yet to win one game since they played Temple the first time on September 29.  Tulane is 1-7 in conference play and has lost six straight games.  They lost the first game to Temple 3-1, and the Owls look to repeat that success.

The Owls are currently tied for third in the conference standings.  The still trail SMU who is 7-1 in conference play, and Wichita State who is 8-0 in conference play.  The championship is certainly still obtainable for the Owls as they play both of those teams once more before the year ends.