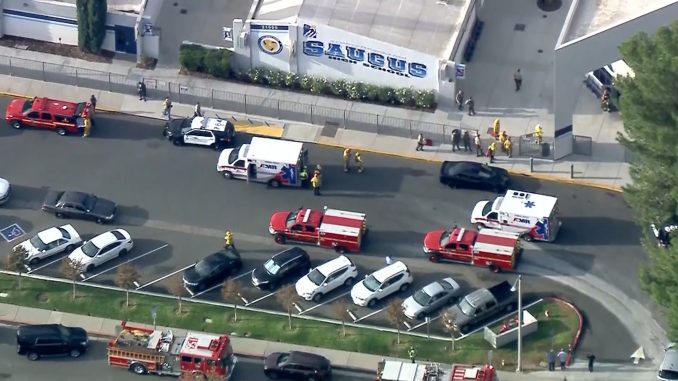 A student pulled a gun from his backpack and opened fire at a Southern California high school Thursday, killing two students and wounding three others before shooting himself in the head on his 16th birthday, authorities say.

The gunfire began around 7:30 a.m. at Saugus High School in the Los Angeles suburb of Santa Clarita. Authorities estimated that the suspect took just 16 seconds to pull out the weapon, shoot five classmates and turn the gun on himself.

The attacker was hospitalized in critical condition, officials said, and investigators offered no immediate motive.

The suspect appeared to fire at whoever was in front of him. He had no known connection to those he shot, Los Angeles sheriff’s homicide Capt. Kent Wegener said.

Video showed the last thing the assailant did was shoot himself with the final bullet in the .45-caliber handgun, Wegener said. The weapon was empty when it was recovered.

The sheriff said a biography on an Instagram account reported as possibly belonging to the teen contained the posting: “Saugus, have fun at school tomorrow.”

The message was discovered Thursday morning after the shooting. It was unclear when it was made and by whom, the sheriff said.

It was later removed, and investigators do not know who made the change, Wegener said.

Fellow students and a neighbor say he was a Boy Scout who was smart, quiet and gave no indication he would become violent. One girl who knew him for years said he wasn’t bullied and had a girlfriend.

The Associated Press’s Stefanie Dazio and John Antczak contributed to this story.