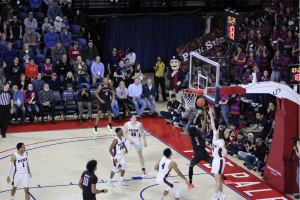 Temple will have quite a few new faces on it’s Men’s Basketball team in 2020, though not all will be on the court to start the season. This is the case for guard Jahlil White, who suffered a torn meniscus. The injury occurred during a routine practice on October 24th.

Though this injury is significant and is disappointing for the freshman, there is good news that comes with it. White received surgery for his torn meniscus on November 3rd by the team’s Physician, Dr. Milo Sewards, at Temple University Hospital. The surgery was successful, and White is expected to make a full recovery, though he is expected to miss the first two to three months of the season.

Coming out of Wildwood Catholic High School, Jahlil White was a third-team all-star player during his senior season. White averaged 16.6 points, 4.9 rebounds, 2.8 assists, and 2.4 steals per game during his final season at Wildwood, and helped his team capture a  third straight Cape-Atlantic League Tournament title and the South Jersey, Non-Public B crown, their first sectional title since 2007. This stat line and gritty performance during his previous season should have Temple fans excited to see what White can do once he returns to the court.