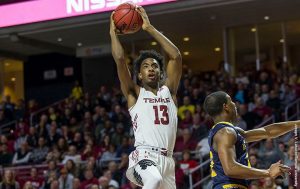 Temple’s head coach Fran Dunphy decided to switch things up for the Owls’ road game at Memphis. The Owls started the veterans Shizz Alston Jr., Daniel Dingle and Obi Enechionyia, but surprised everyone when he inserted freshmen Damion Moore and Quinton Rose.

Dunphy’s decision to dip into the fountain of youth paid off as Damion Moore provided a much-needed post presence and Quinton Rose ignited the Temple offense in their 74-62 win against the Memphis Tigers.

In Damion Moore’s second career start, he posted 6 points and 8 rebounds in his 15 minutes and Quinton Rose recorded a team-high 18 points as he knocked down 4 of his 5 three-point attempts.

Early in Sunday afternoon’s contest, it looked like Temple’s road woes would continue against the 3rd ranked team in the American Athletic Conference. The AAC’s second leading scorer, Dedric Lawson, dominated with 7 points in the first 4 minutes, and the Temple offense lacked any sort of flow.

In a little less than a dozen minutes, the Owls put on a beautiful scoring display and completely shut down Dedric Lawson and the Memphis Tigers. They went on a 25-2 run to take a 14-point lead heading into halftime.

The 25-2 surge was led by sophomore Shizz Alston Jr., who recorded 10 points over that stretch, including a three-pointer as time expired in the first half. The Owls shot 57% from the field with their 17 for 30 shooting clinic and all eight Owls that saw action in the first half scored at least one bucket. On the defensive end, the Tigers could not buy a bucket as they made 1 of the last 13 field goal attempts to end the first half.

The Tigers clawed back into the game in the second half as they switched up their defense and applied a full court press. The full-court pressure did not force turnovers, as the Owls finished with 19 assists to 10 turnovers, but it seemed the break that fantastic offensive flow the Cherry and White showed late in the first half.

The Owls outscored the Tigers 18-10 in the final 7 minutes to put the game on ice. Of those final 18 points, 9 came from the charity stripe as Temple shot 9-12 from the line during this stretch and the other 9 points came from behind the arc. Quinton Rose cashed two threes in the last seven minutes and then Obi Enechionyia nailed the dagger from the corner with 33 seconds to go.

Enechionyia posted 10 points (3/8 from behind the arc) and 6 rebounds. Senior captain Dan Dingle had 13 points and tied his career high with seven assists.

The victory was the Owls’ third win in a true road game, and it improves their record to 14-12.

The Owls will be back in action Wednesday night against the East Carolina Pirates. The Pirates, at 3-9 in the AAC, sit in 9th place in the conference. This matchup could potentially be the same matchup the Owls have in the first round of the American Athletic Conference tournament in Connecticut. Tipoff is scheduled for 7 pm and the game will air on ESPNNews.