Two top-5  offenses squared-off against one another this Saturday at Lincoln Financial Field. The Owls took on the Maryland Terrapins in what was thought to be a shoot-out, but it ended up being quite the opposite.

As Temple coach Rod Carey said prior to the game, the plan was simple, “Don’t let them score 60.” And the Owls did much better than that holding the Terrapins to just 17 points to Temple’s 20.

Right from the opening drive the Owls looked ready to slow the Maryland attack. Temple’s Harrison Hand picked off Josh Jackson giving Russo the opportunity to draw first blood and that’s exactly what he did.

In 4 plays and just over 1 minute Russo found Isaiah Wright on a 29-yard touchdown strike giving the Owls an early lead. Unfortunately for Rod Carey and company, this was one of the only offensive positives for the game.

Special teams seemed to struggle most in the half with a missed field goal, a fumble during a punt return and safety on a errand long snap. Still, the Owls defense held strong holding Maryland’s offense scoreless until halftime. 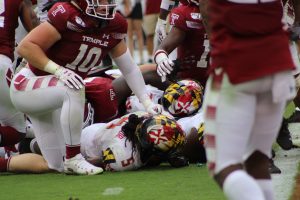 Then the Terps began to show signs of life. Star sophomore running back Anthony McFarland Jr. capitalized on an 11 play, 84 yard drive giving Maryland a 9-7 in the 3rd quarter. McFarland proved to be Temple’s biggest threat as the game progressed racking up 132 yards and 1 touchdown on the day.

The Owls answered back in a blink. On the first play of Temple’s drive Russo hooked up with Jadan Blue for a 79-yard explosion giving the lead back to the Cherry and White.

Then Temple got sloppy again. When the opportunity for the offense to go up 2 scores came, the Owls did not answer. Two turnovers — one interception and one fumble — led way to an easy Maryland score putting them back on top.

Russo had the last laugh, though throwing a 4th quarter touchdown to Kenny Yeboah, which proved to be the difference.

Maryland had it’s chances in the final minutes. With under 5 minutes left in the game, the Terps were knocking on the door as the sat on the 1 yard line, but Shaun Bradley shut down any chances of that tackling McFarland behind the line of scrimmage. Shockingly that was not the last stop the Owls would need to seal the game.

Following a punt of just 7 yards the Terps were once again right at Temple’s doorstep, but once again the defense held strong. In Maryland’s final offensive Temple once again sacked Josh Jackson forcing the team’s last turnover on downs.

Defense proved to be king for Temple racking up 4 sacks, 10 tackles for loss and 3 stops on 4th and goal.

“This is the best defense in the country”, said Re’Mahn Davis, “I’m saying it and everybody else should be saying it too.”

The Owls will look to lean on their defense again next Saturday as they take on Buffalo.